The exact definition of the term ‘herbs’ has been discussed many times. The botanical definition produces a list that differs from the list of herbs we use for culinary applications. Moreover, there are other herbs with a medicinal effect that are classified in yet another way. And don’t get us started on the difference between herbs and spices …

When we talk about herbs, we mean herbs used in cooking, primarily the green leaves of aromatic plants such as basil and coriander or the tips of the plant, like dill and chervil. These green herbs grow mainly in the Provence region of France or in Northern Italy.

In addition to the popular European herbs, there are grassy crops such as lemongrass (serai), roots like ginger and horseradish and fruits like red chilli peppers.

The culinary definition of a herb is broader than the botanical one, and despite the fact that we are now talking about a large variety of plants and parts of plans, it is all immediately obvious to a cook. All of them are flavourings produced by plants: herbs and spices we use in cooking.

There is one thing they have in common in every definition: they are all plants or parts or plants with a pungent aroma. An aroma is a combination of elements that produce smell and flavour - a combination that is essential for we humans because we can only taste primary (basic) flavours (salt, sour, sweet, bitter and umami). We don’t actually taste the other ‘flavours’ but detect them by means of odour receptors. In many herbs, these aroma-producing elements are volatile like a perfume. That is why we can smell the strong scents of herbs from quite a distance when we are in a field of herbs or when we touch the plant with our hands. This strong aroma is not produced by the plant to please humans but acts as a natural defence mechanism to prevent the fragile leaves being eaten by insects or cattle.

Now that we know that the aroma-producing elements of many herbs are volatile (volatile = evaporates at room temperature), it is logical that drying many herbs to give them a long shelf life is not very good for the flavour. The drying is often done in drying rooms where the temperatures are high, or with the help of the sun and as a consequence the aroma ‘evaporates’ and the flavour vanishes.

However, this does not apply to all kinds of herbs; in some kinds, the aroma is found mainly in the oily part of the plant. Prime examples of this are chilli peppers and nutmeg, and these kinds have a much stronger flavour when dried, as the oil cannot evaporate.

Nonetheless, for most kinds of herbs, drying has a detrimental effect on the flavour. It is also unnecessary, as there are very many other techniques nowadays that preserve herbs for a long time, including the method used by Bresc. 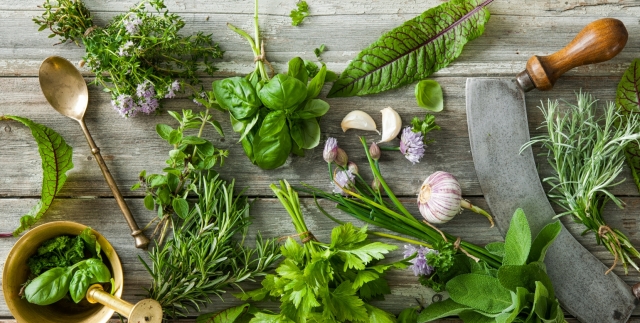